A ‘Cut Roof’ is a term used for a traditional roof that was usually cut from singular members of timber and constructed on site. In a cut roof timber members such as purlins, ridges, rafters, binders,struts, collars and ceiling joists would be sawn on the building site and fixed together with the use of bright nails in place to form a roof stucture. Cut Roofs are usually dependent upon a central loading point such as an internal wall often know as a ‘spinal wall’ constructed from brick and running from the first floor down to the foundations. These style of roofs were superseeded by a trussed roof.

It is found that in these Truss Roofs that the most common being a fink truss ( equal pitch on either side) that the individual members are fixed at meeting points by a gang nail plate (a plate with punched though sections creating pointed protruding pieces of metal which secures the plate to the timber) on either side. This style of trussed roof used commonly still to this date would be usually fitted at 600mm centres unlike the 450mm centre of its predecessor.

When constructed correctly it is often found that the new load of the loft conversion is to be transferred to the foundations via external and sometimes internal load bearing walls. This is commonly done by using Universal Steel Column beams commonly known as Universal Columns or UC in is shortened version, however timber composite and laminated beams can also be used but it is found that their size in terms of the loads required are somewhat impractical. Flitch beams are also common in loft conversions these are flat steel plates (8mm up to 20mm) in size that are bolted in between two timber members and are usually used for stair trimming or as ridge supports.

A common mistake is that most people class a steel beam as a RSJ this is in fact incorrect and it is found that in modern construction Universal beams or Universal columns are widely used.  RSJ- Rolled Steel Joists are produced in a very small quantity nowadays.

Developed by the Timber Development Association an organisation set up circa 1947, in the aftermath of the Second World War restrictions were imposed on the use of timber.

The TDA came up with a roof truss that significantly reduced the amount of timber that was to be used in the construction of a roof.

The implementation of the TDA roof Truss meant that the sectional sizes of the timber members used, could be reduced due to the triangular frame that consisted of two opposite rafters.

These would be tied into a horizontal ceiling joist and bolted at the meeting points with an internal framework consisting of strutting and ties all bolted at relevant joints, therefore creating a solid and stiff structural triangular frame.

Give our friendly team a call During construction the ridge beam can be located in various ways as shown within the hand drawing. For the purpose of information a picture of the most common method used for insertion of the steel into the party wall has also been included.

The following text is to be as guidance only and more in-depth information on stair access can be located in Approved Document K Protection from falling, collision and impact and also on the following series of standards (BS585 and BS 5395) in relation to stair specifications.

Changes mean that there is no longer a minimum floor to ceiling requirement within rooms, however Approved Document K does state that a minimum clearance of 2 metres should be maintained on stairways and landings which also includes any beams or timber bessimers/purlins that are to be found in these areas as they present a hazard of impact.

The Standard for loft conversions is a 2 metre clearance from the front of the tread (measured from the nosing, the rounded part of the tread to the ceiling) although there are exceptions to this ruling and in the Approved Document K it does state that reduced headheight /clearance is allowed as long as it is within the following  a 1.9m clearance minimum to the centreline of the staircase and a minimum of 1.8 on one side only as shown in the drawing below. However Valley Lofts Conversions will always attempt to gain the 2 metre minimum standard in all cases where possible. 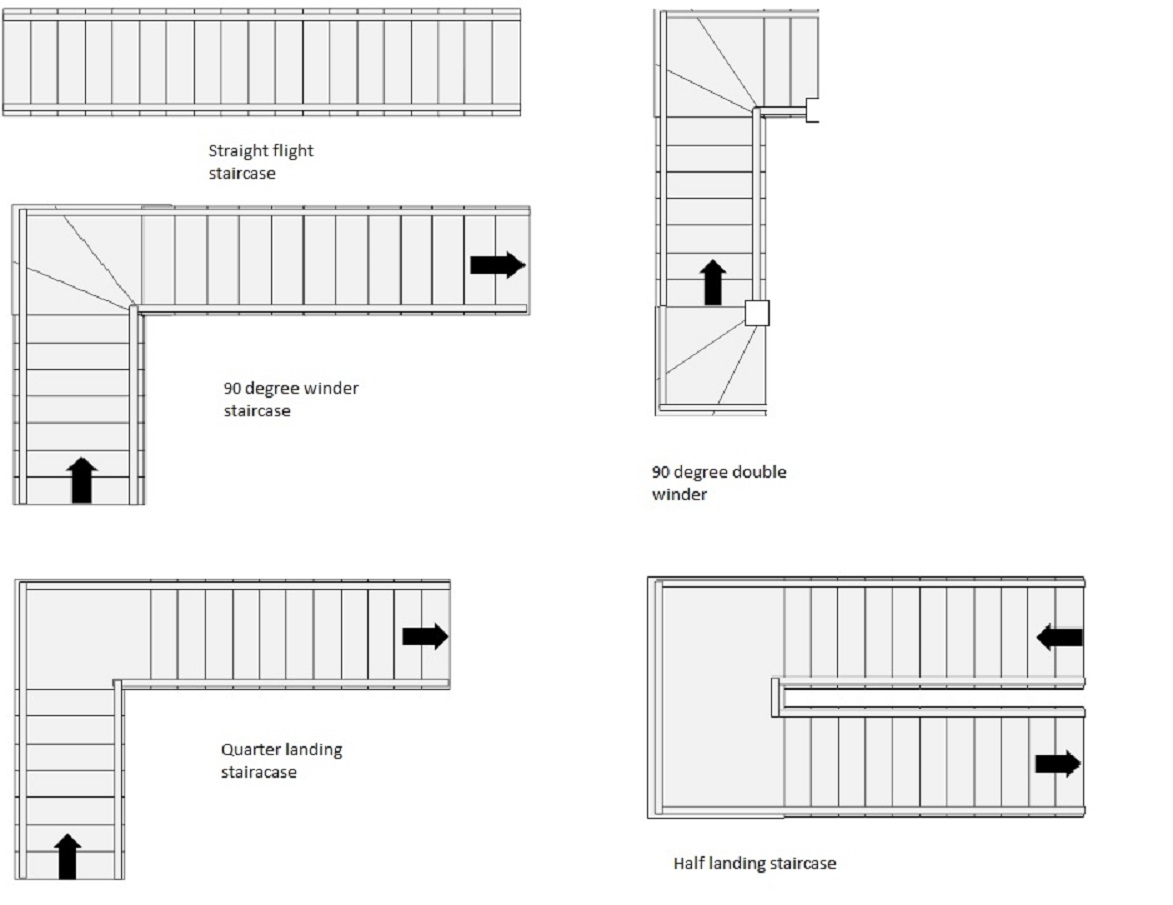 Trimming out and making provisions for the stairs has important repercussions for the floor immediately below and not just the layout of the converted loft. It can be found in certain situations that there is a necessity to lose room space usually from the small box room at the front of the house to accommodate the new staircase.

When this situation arises the homeowner would have to decide if the new space gained by the conversion outweighs the space lost in the first floor room. But usually it is found that the location of the new staircase is sited directly above the existing staircase almost a mirror image and in most cases slightly smaller than the original footprint of the existing staircase. There are a number of stair configurations, the most common are shown below opposite:

So that access can be gained for the first fixing of plumbing and electrical work and to allow for building inspection of the structural floor, the laying of the loft room flooring will generally not be fixed into their final place until the dormer/ loft structure steel beams, joists and internal walls are completed.

Most modern day composite flooring materials have a higher degree of stability if kept dry. It is always advisable to allow for the flooring material to be laid loose and flat on the structural floor until such a time that the first fixing of other trades has been completed in order to allow the flooring to acclimatise to its surroundings.  Timber is a hydroscopic material (which means it will draw moisture from the air and other sources to gain equilibrium to its surroundings).

In the event that tongue and groove softwood flooring is required this would usually be laid directly on top of a chipboard subfloor. It is always advisable to expect a higher degree of shrinkage in softwood T&G flooring even with heavy cramping due to the higher moisture content found in softwood.

All flooring materials should be laid with staggered, glued joints and ring shank nails as this type of nail offers a higher resistance of withdrawal and will therefore significantly reduce the risk of creaking floors.

We at Valley Loft Coversions have on this page tried to impart a small section of our knowledge and nowadays it is very easy to locate all the technical information you may require via the World Wide Web and other sources.

If you cannot locate what you need then please contact us.

Give our friendly team a call

website built & maintained by walkingdigital
We use cookies to ensure that we give you the best experience on our website. If you continue to use this site we will assume that you are happy with it.OkDecline CookiesRead more